If you find any bug in the game, please report here

I cant play, my internet connection seems to be fine but it says “ERROR bla bla bla” 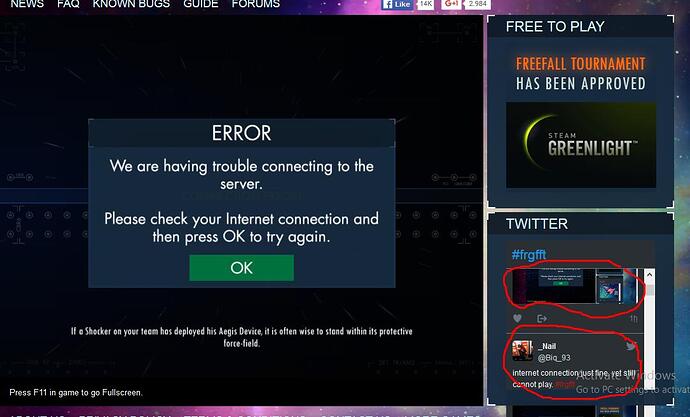 
And its not just my problem people on twitter tweeted how they also can’t play.

Yea that happened with me but only when my net wasnt working for real lol.

When I try to play, I get this: http://imgur.com/VXO5xvk
It’s the first time I’ve gotten something like this.

The respawn shield. This is a good feature in the only map you can get spawn killed (Training Arena team deathmatch), but I don’t get the reason it’s in all the others. If you are fast enough, you can use those seconds of invulnerability to clean capture points or just dealing damage without getting any back (which is garbage). It’s mostly abused by scouts, assassins and few fast tanks. It shouldn’t be there where it’s not needed.

The game models. As a gunner I can tell you that the models in air have some big problems, throught experience I’ve got the idea that the hitbox models don’t really keep up with the fast flying movements. I’ll explain why using the head hitbox.
In case of just a normal jump standing still, the speed is low and you can still hit the head without any problems, but you can already notice something. The hitbox is not on the head, it’s placed slighlty lower (shoulders). Now you may think it’s not a big deal but in reality it is, because it means that the faster you go more delay there’ll be with the hitbox model.
It even happened with scout that I could actually hit under the shoes and get hit under that. (With bomber’s Q we have some other issues, like no head hitbox at all or just weird effects of the skill).

When I try to play, I get this: http://imgur.com/VXO5xvkIt’s.

This.
I just went off my alt to get on my main and this happened cant join anymore

It should be fixed soon. our developers are working on it.

It’s funny, cause I haven’t had it since I reported the bug.

Mega damage. Great concept and idea, which keeps the arena style to the game, but it’s not supposed to double the status effects as well. Any knockoff, stun or status effect (poison) done while having mega results in a double time effect of it. Imo it should be fixed.

This post was flagged by the community and is temporarily hidden.

Its the wonderful tank on sterriods…again

You know the mauler bug where when you spin the mauler your travel at 22mph speeds? Yeah, somehow I made it happen again.

I have a problem with the gunner scope, when i shoot turn freezes something like lag and is hard try to play, i told this first to Rja and he told me that is comun, first i thought that this problem happend only to me but now that this guy say that he have the same problem, can be something to fix… :S
‘‘minha sniper do gunner ta bugada’’ my gunner sniper are bugged… i think

Is the official site not working for anyone else?

Im have the trouble were the loading screen freezes and i cant load the game even if i wait for it all day to load it, it wont.