Powerline.io is a free online web browser io game created and developed by Andre Almeida and edited by Profusion Studios. It was released for non-mobile web browsers

It looks like similar snake games - with a really cool neon style - but with is own twist.

The game involves players taking on the role of a powerline, similar to a snake from Slither.io, another popular io game. The player must kill other players by causing them to collide with their powerline, and eat their food to grow. The trick is that players will gain a speed boost when close to other powerlines, so they must act quick and efficiently to take out other players and gain their food and become king.

What is a Powerline?

The Powerline is the long line of energy that the player controls in Powerline.io.

The Powerline is a straight line (as the player turns the line turns with them, but never bends, it always
stays straight) with a white head at the tip. The powerline’s color is randomized when the player spawns/respawns. When the player reaches over 2,000 points, the powerline will thicken and occasionally gain stripes and glow. As the powerline grows in size, it becomes slower and harder to maneuver, but can still boost. 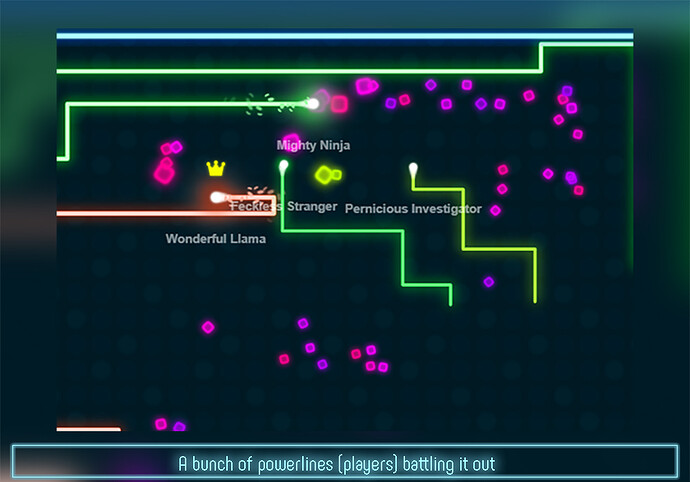 Food (also known as points or pellets) are the pellets that powerlines must collect to increase in length.

Food is dropped by powerlines (players) when they die. Any powerline can collect the food dropped by another powerline, even if it was not the player who killed them. As food is collected, players boost. Each pellet is worth 10 points (a score of 10). The more food players collect, the longer they grow and the higher their score becomes. The player with the most food collected (highest score) is king until he is killed, and he drops all his food for others to collect.

Food resembles small square pellets whose color depends on the powerline they came from (the powerline that dropped the food after they died). Food floats, hovering in the same location it was dropped. Food despawns after 30 seconds of being uncollected. 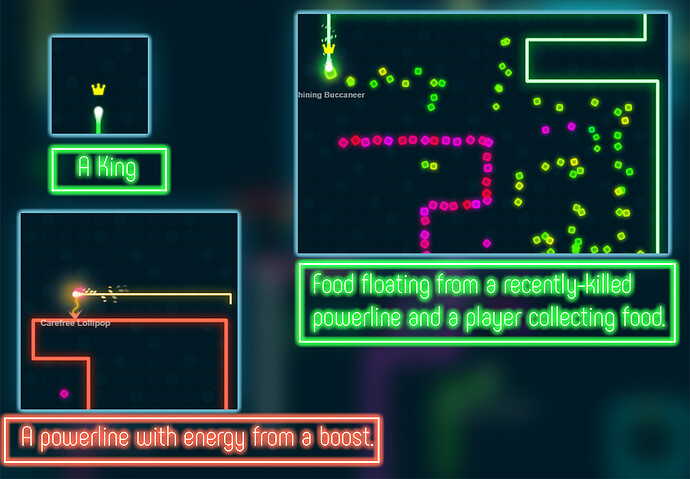 Trapping , also known as boxing or boxing off , is a method and game strategy in Powerline.io in which a player traps another player inside themselves, creating a wall that the inside player cannot escape from. The player can then collect the remaining food if the trapped player dies (by crashing into the “wall”, or even killing themselves).

From the developer of Brutal.io, this is Powerline.io that has Slither.io and Splix.io mechanics with a unique twist. You gain speed by obtaining pellets from player deaths, or scaling the side of a player's snake path in order to increase your...

That a drama for now

Can you be clearer?