It’s true, the Clash 3D game series is no longer to present.

These super fun and boosted online

games will keep you entertained for a long time!
And besides, it’s totally free

, what more could we ask for? 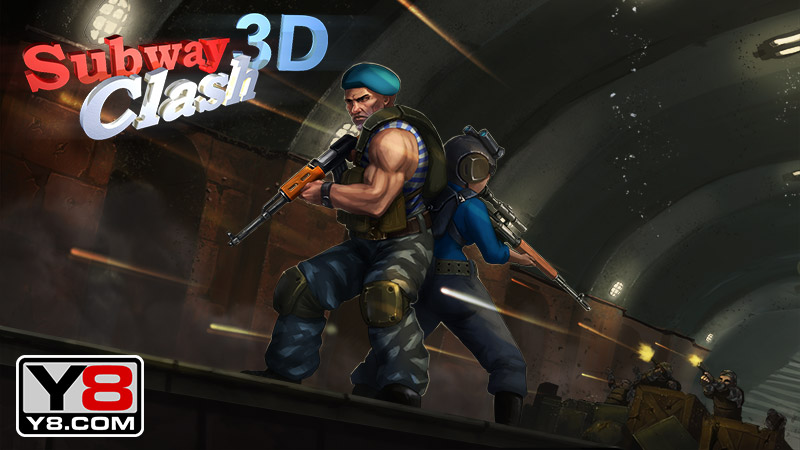 The action of this cool 3D game goes underground in the hallways of what appears to be a disused old Soviet subway. 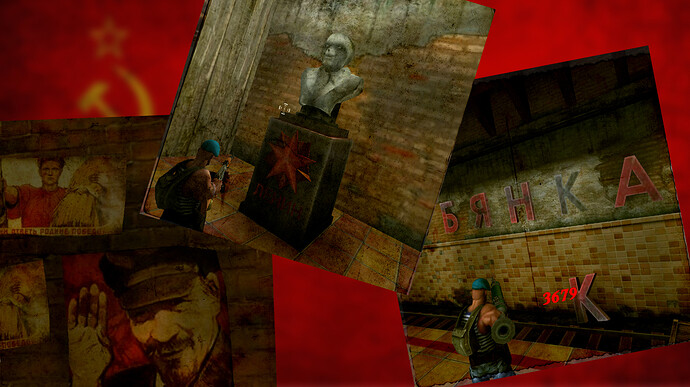 You control a badass character in a blue team with your fellow comrades and fight against the red team.
As a Third Person Shooter your point of view is from the back of you character.

The goal of the game is more than simple: hunt down and kill the reds. The team with the most kills wins the game
What are you doing there? Why do teams compete against each other? Nobody knows.

No time to think under enemy fire anyway.

The underground and corridor sides of the game coupled with a dilapidated atmosphere can sometimes be quite oppressive especially when you are stuck by a wave of enemies, 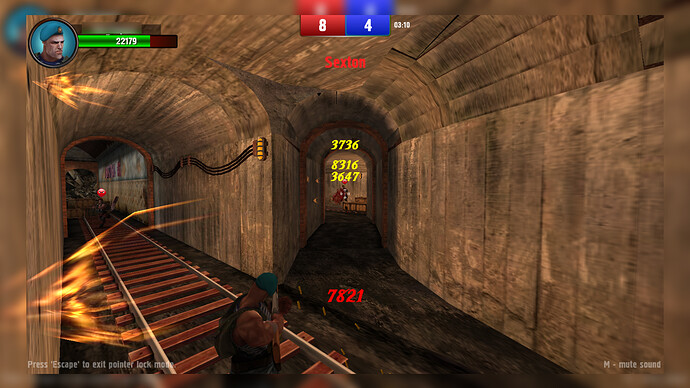 but the whole is largely offset by the almost cartoony style of the characters, their grotesque gait and a certain number of cheeky winks. 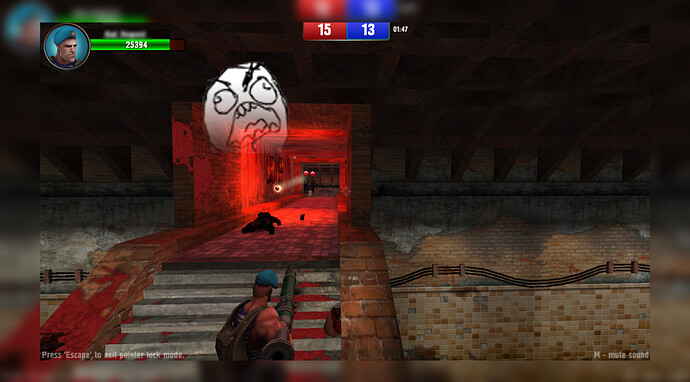 Use the weapons at your disposal: AK-47, Shotgun, Rocket launcher and crush your ennemies.
Try to unlock all achievements

and beat the leaderboard!

You can play the game here 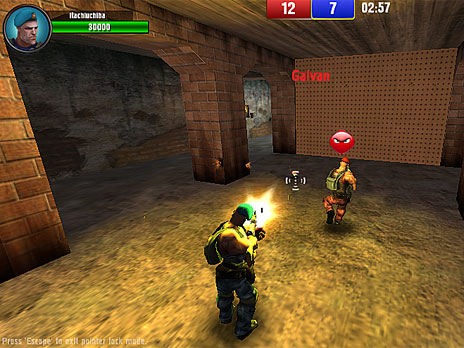 Cool 3D game taking place underground. Find the enemy in the subway and dispose of him. Become the best player of all. It will be difficult because you'll have to face many enemies. Take guns, rocket launchers and fight as best you can. Make sure... 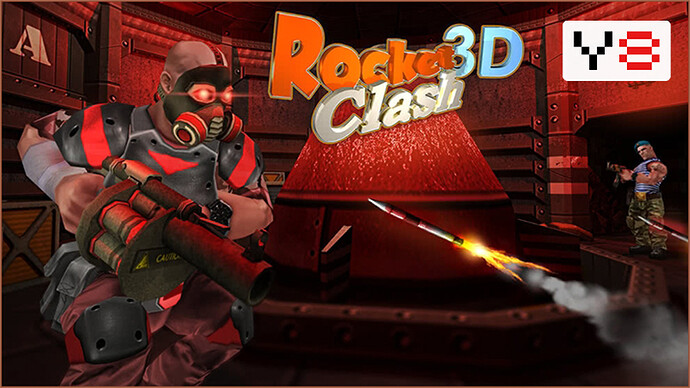 We stay underground but this time you’ll lead the resistance squad of special forces opposed to attempts of enemy intelligence agents to establish control over a quite creepy missile base. 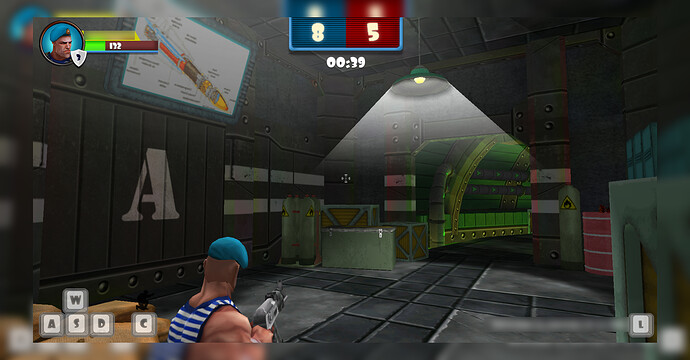 One objective: to kill them all! If you want to win, your team must have the most of kills.

Boring? No worry, this tactical team shooter, full of adrenaline and reckless action will brighten up any waiting time! And you know the best? Rocket Clash 3D is playable on mobile devices 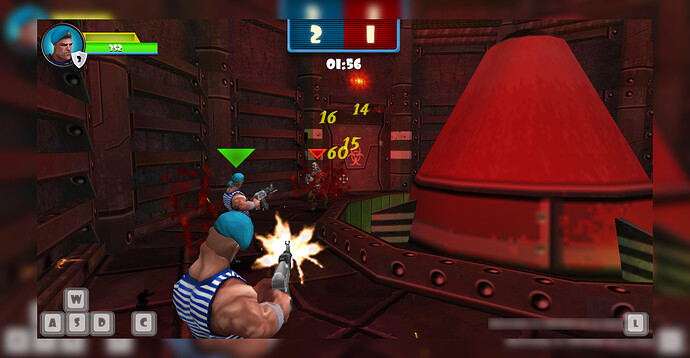 Beware of the acid pools of poisonous rocket fuel and explore the network of underground tunnels. 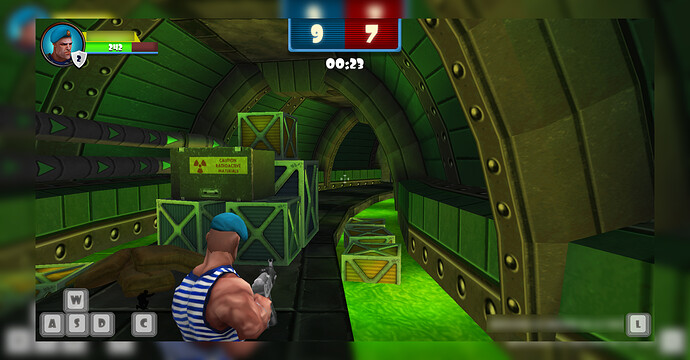 In this battle, you harness the power of a shortened tactical version of the famous AK and a secret weapon hidden deep within the level…

Also, the simple character leveling system will give you an extra advantage in the next battle.
Improve your health or weapon damage.

You should try to unlock all the achievements

, the golden weapons and, why not, trying to get the best score?

Rocket Clash 3D is a tactical team shooter, full of adrenaline and reckless action. Lead the resistance squad of special forces opposed to attempts of enemy intelligence agents to establish control over the missile base. In this battle you’ll harness...

Howdy, guys? For the 3rd episode of the series we finally get some fresh air and fixin’ to fight on a farm

In Farm Clash 3D, it is no longer KGB agents tryin’ to suppress ya but pesky Native Americans/American Indians!

If you’re a true cowboy

worth its salt you’re fixin’ to show them what it costs to come after ya, aincha ? 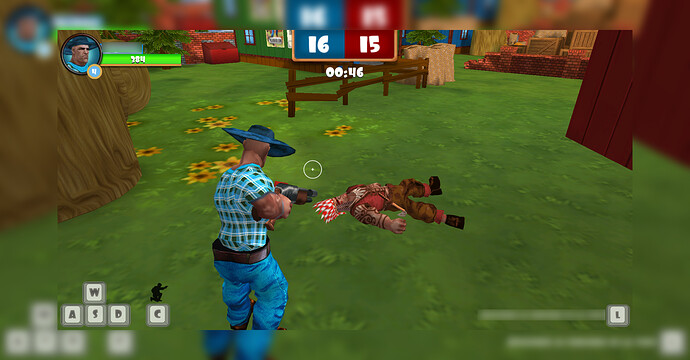 Like the previous parts, this fun and addictive Third Person Shooter won’t leave you indifferent!

Dang! The evil Apaches are on the warpath

and they attack to steal the ripe pumpkins from the farm, possibly for one of their cult, who knows?
Seems these idiots didn’t know that you should never slap a man who’s chewin’ tobacco!
As a team of gallant cowboys, you won’t let 'em!

Use the deadly shotgun or the secret weapon hidden in the depths of the level to stop the enemies. Scold the houses in search of useful secrets.
The game is playable on mobile devices

too (IOS and Android) 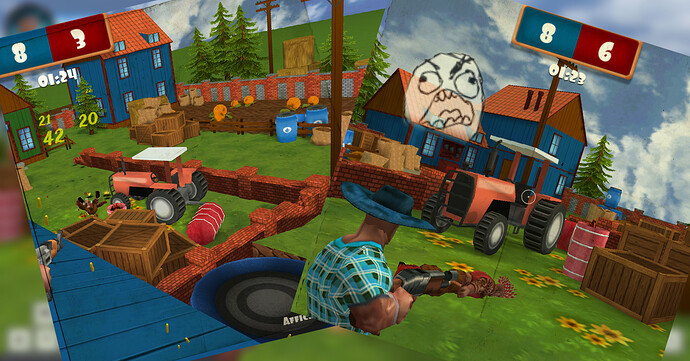 Annihilate 'em in a shower of blood on a background of Troll song
music ! 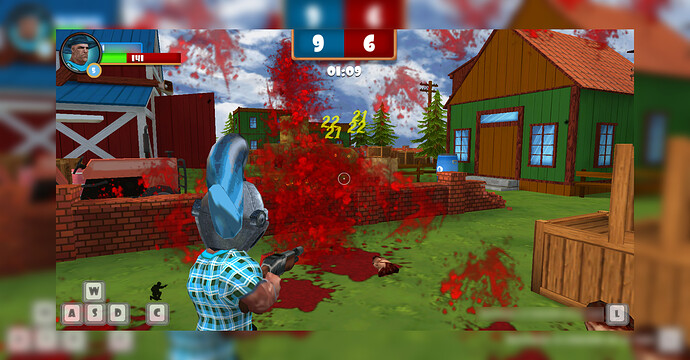 As usual try to get all achievements

Farm Clash 3D is themed first-person shooter game. Find your favorite firearm and shoot it out in the multiplayer farm world. Try to hit your opponents while avoiding being shoot yourself. If you enjoy the action of 3D FPS games, Farm Clash is a must...

Without transition, we are already at the 4th opus.
In Sniper Clash 3D you will be transported straight to the Middle East. 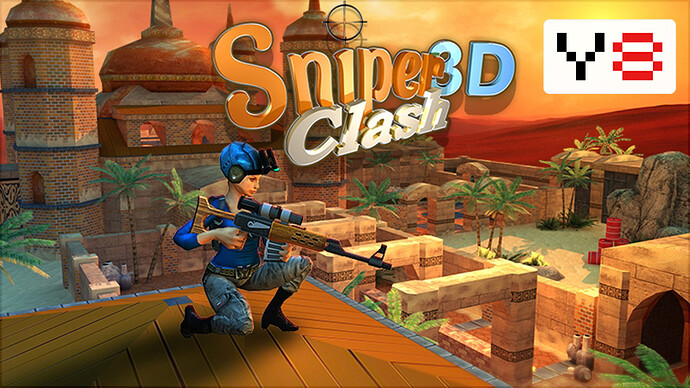 Don’t be fooled by its sweet oriental scent, because Sniper Clash 3D is a fun and nervous team-based third-person shooter with capture the flag mechanics that won’t leave you neutral for many hours. 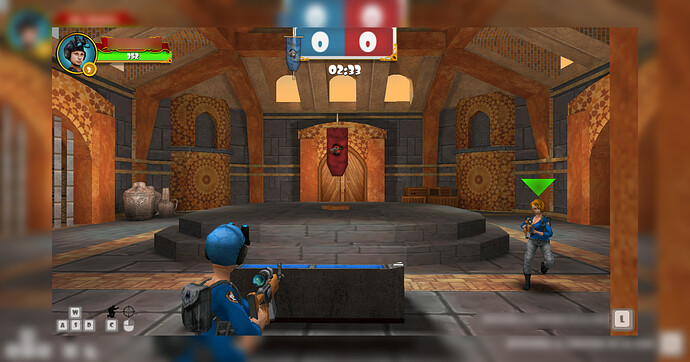 Survive the storm in the desert surrounded by lush green palm trees against the evening sky at sunset. 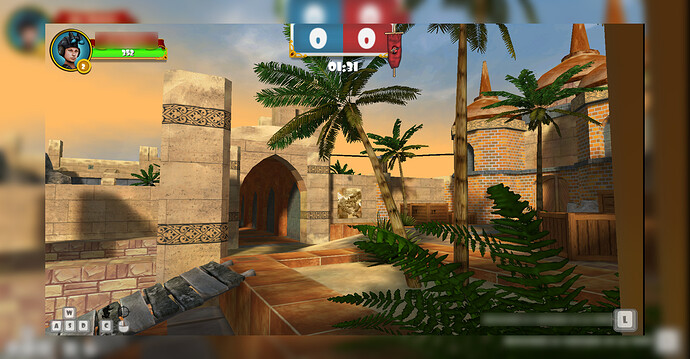 You play as a secret agent sniper girl sent here with your team to infiltrate and seize the trophy relic of the evil desert nomads. 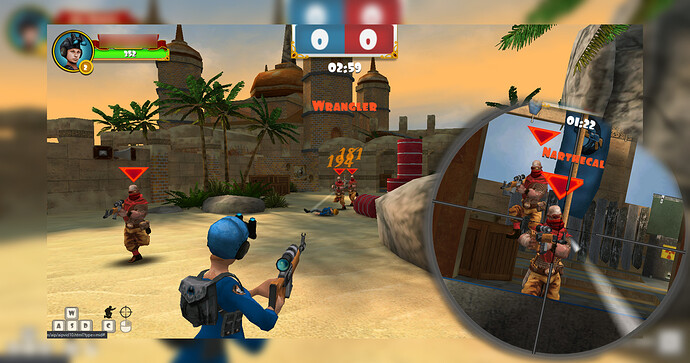 You’re the angel of death in these cursed sands: Aim and shoot to kill. There are also many hidden items and secret weapons on the level. Find them all to make your tactical return!

By gaining some XP in battle you’ll can upgrade your character and this will give you an extra advantage in the next battle.

In this game, you control a character with a deadly sniper. Your mission is to capture the enemy team’s flag and bring it back to your base. Use a tactical approach and dominate the battlefield! Take a role of a secret agent sniper to infiltrate and...

Let’s take some firepower with the 5th episode of the series: Airport Clash 3D 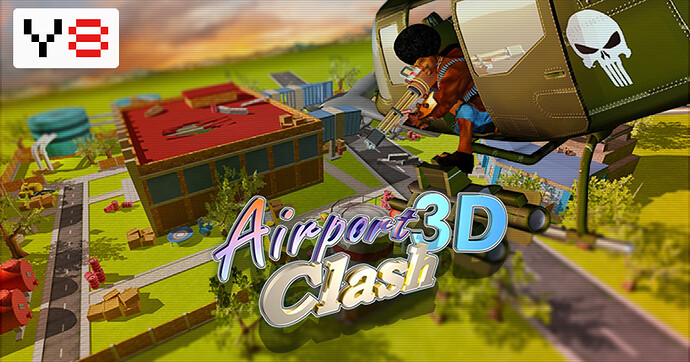 The principle stay the same: You lead the Bloodhounds raider gang to capture and expurgate an important abandoned airport location

from a rival gang, the Vipers. 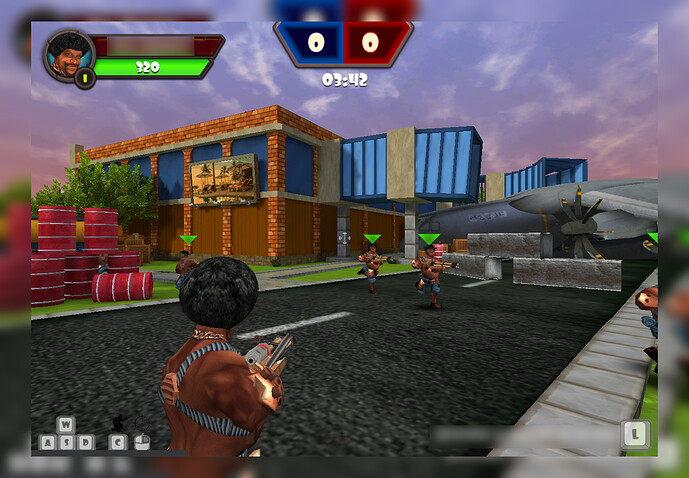 Unleash the power and rage of a heavy military minigun and deliver the final blow to enemy goons by nuking their base with a big MF bomb! 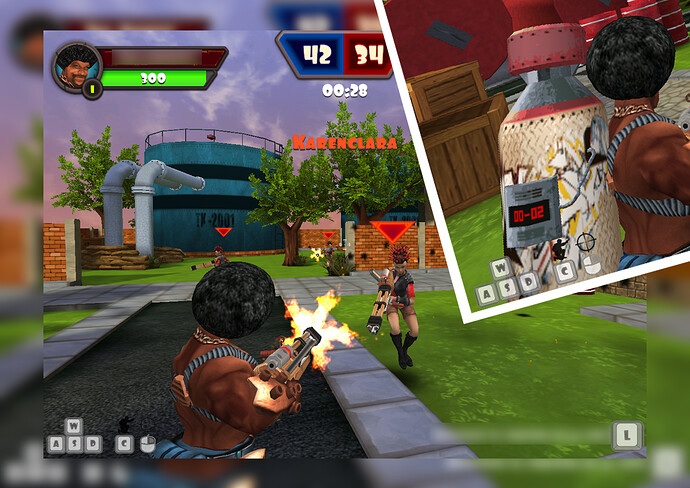 Note that the game is playable on mobile devices

Like in the other parts your character is upgradable

when you earn XP, this will help you for the next battles.

Lead the Bloodhounds raider gang to capture an important abandoned airport location from a rival gang, the Vipers. Unleash the power and rage of a heavy military minigun and deliver the final blow to enemy goons by nuking their base with a big MF...

For the 6th opus, let’s now leave the world of seriousness for that of Christmas tales

with the game Winter Clash 3D. 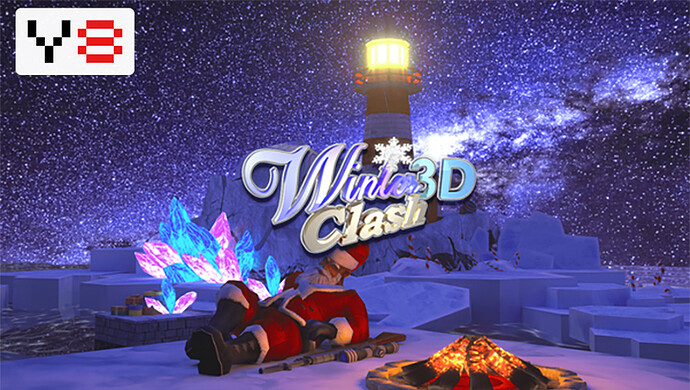 Immerse yourself in this fresh christmas snowy

scenery and be prepared, you and your team of badass Santas, for the fight. 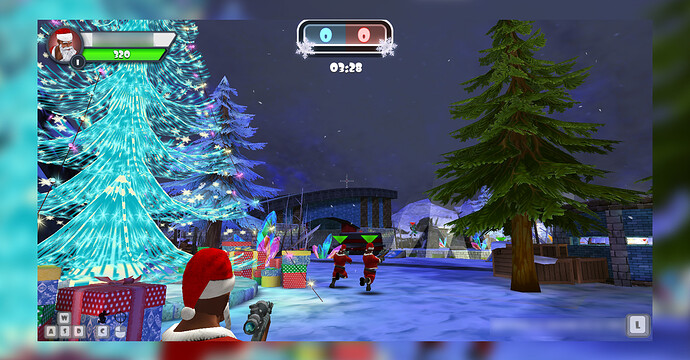 and summon the evil Baba Yaga, also known as the Pagan Idol to this world. 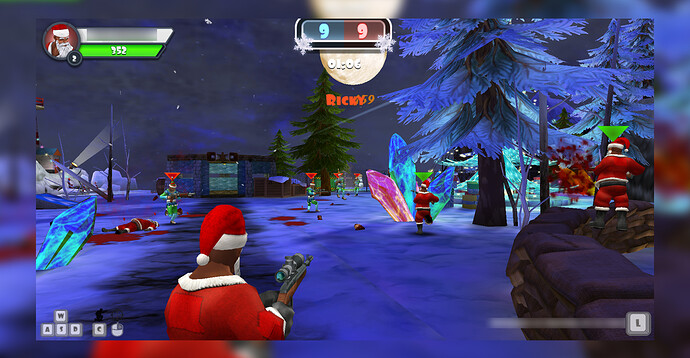 Don’t let that happen. Grab your sniper rifle and inflict punishment on everyone who faces you (especially those weird guys with ridiculous greeny clothes).
Capture the pagan idol of a deserted lighthouse island and burn it to ashes in your Christmas fire

. Try killing with a new headshot system or dealing a devastating blow to your enemies with a fully automatic shotgun.
Use magic boots to increase your movement speed or regenerate your health 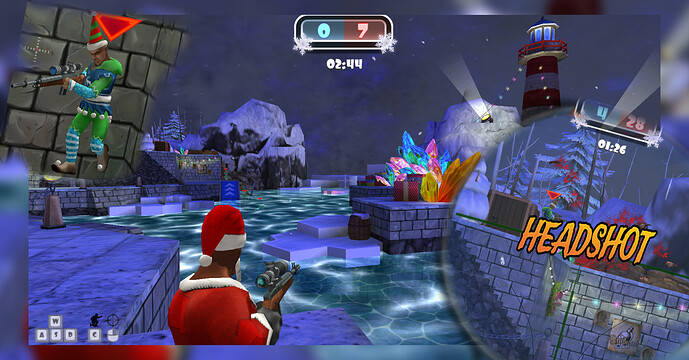 The character leveling system will give you an extra advantage in battles. While plenty of bonus rewards like custom made heads and golden weapons will keep you entertained for a long time.

This Christmas the evil elves plan to take over the Santa’s secret place, and summon the evil Baba Yaga, also known as Pagan Idol to this world. Don’t let this happen. Take your gun and impose punishment on all who confront you in a brand new...

For the 7th part of the series, we go to a place that smells good of cherry blossoms

. You guessed it: direction Japan 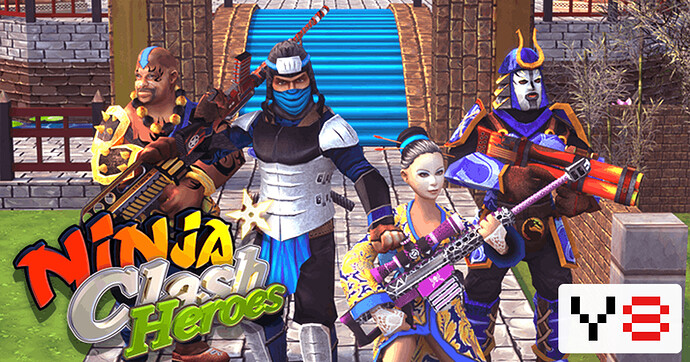 This is a spinoff in the critically acclaimed Clash 3D series.
In Ninja Clash Heroes you take of a squad of professional heroes.

Might it be a sneaky ninja Scout with swift a AK, a full armored samurai, and his powerful rocket launcher a wise Buddhist monk and his unstoppable shotgun or a deadly sniper Geisha, you’ll find a character and a style to you liking.

The action takes place in a beautiful oriental garden, but you’ll have little time to witness the beauty of surroundings as the enemy is thriving to steal the Fortune Cat you side sworn to protect.

Unlock the deadly powers of your class and collect stars to open crates with awesome weapons and boosters. Upgrade

and enjoy Ninja Clash Heroes to the fullest!

You can play it here

Ninja Clash Heroes is new action adventure game of the hit series Clash 3D playable here at Y8.com! Have fun with this new shooting adventure where the Ninja face off on two sides with fire arms. Get your team ready to clash against the opponent team...

8th and newest part, released at the end of 2020, Moon Clash Heroes 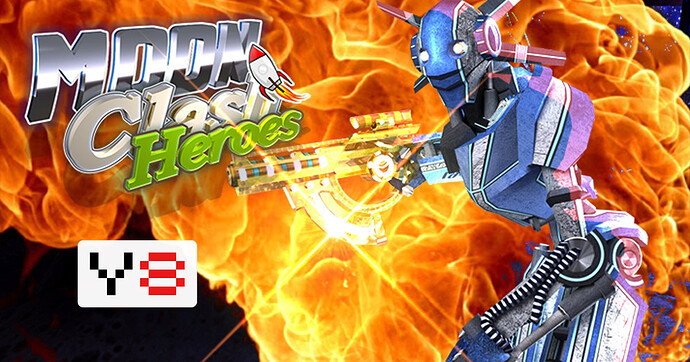 Players, it’s time to join the Space Forces!
Several fighter classes are available for you

Build you career as a fearless spy capable of destroying enemies with one shot from the shadows, thanks to her sniper rifle. 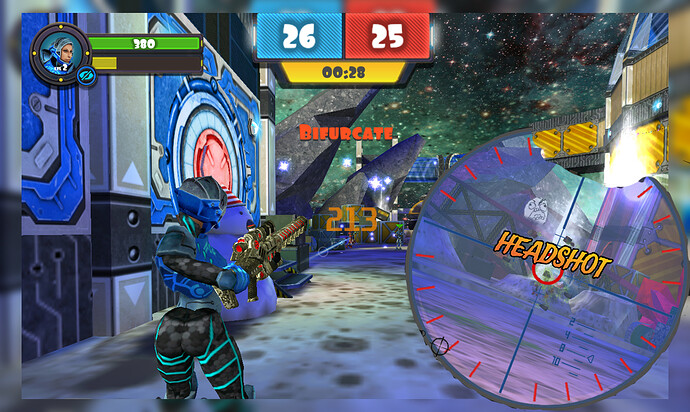 Do you prefer frontal attacks? So take the role of a huge terminator, armed with a big mass destruction system and trample your enemies. 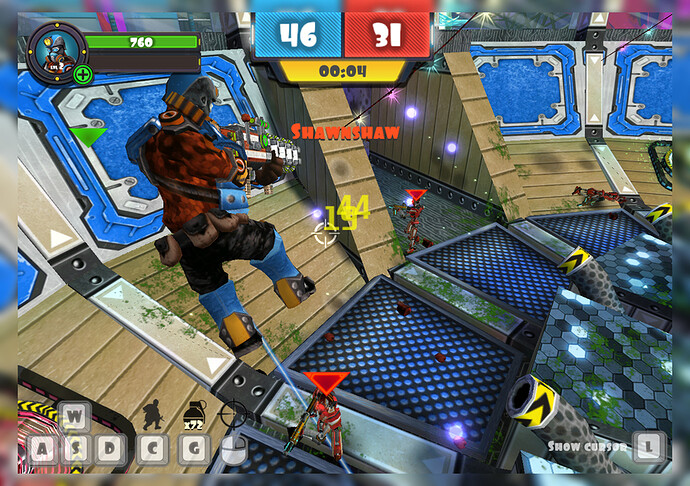 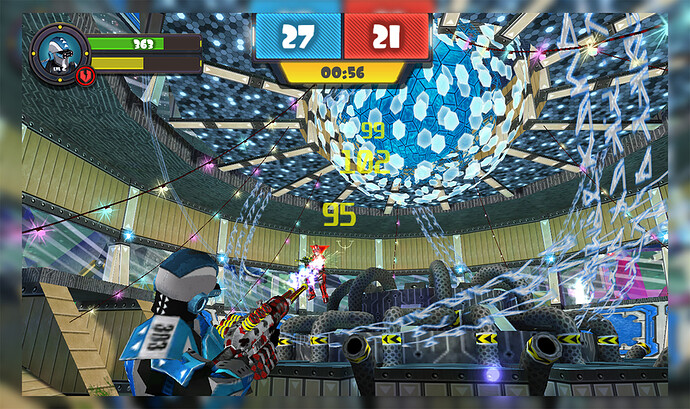 … or take control of a remote strike bot with a photon weapon. 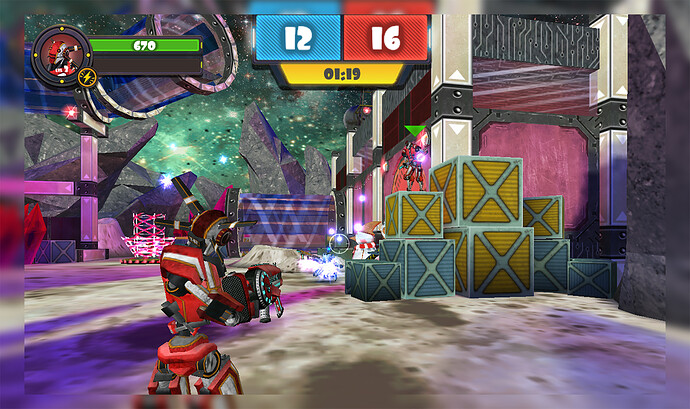 Everything is possible in the space squad! Explore all the nooks and crannies of the abandoned lunar base, enjoy the views of deep space and defeat your rivals. 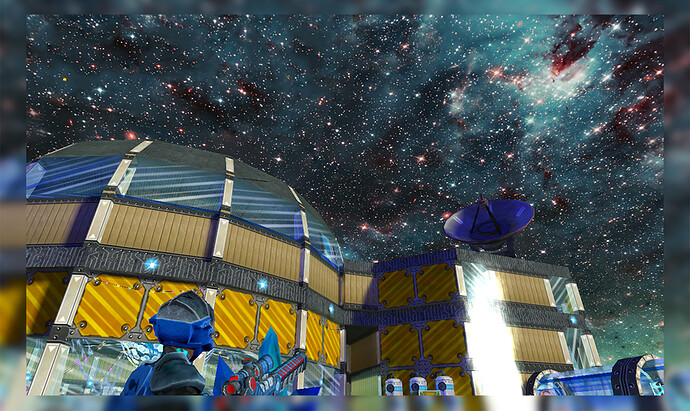 Command has high hopes on you, soldier. Unlock the deadly powers of your class and collect stars

to open crates with awesome weapons and boosters. Upgrade your character, earn medals

and enjoy Moon Clash Heroes to the fullest!

Moon Clash Heroes is a futuristic third-person shooter game with robot soldiers. Get ready to engage in a fast-paced death match battles along with your team mate against enemy robot soldiers in a futuristic battle environment featuring high-tech...

This was really a good topic!

how informative is this topic

@Bad_Request, did you know how to get the rocket launcher in Rocket Clash 3D?