Fireboy and Watergirl Kiss - Review (Why did I spend time doing this?)

I have been wanting to review a romance humor meme fangame known as Fireboy and Watergirl Kiss. Which is a singleplayer 20 level physics-puzzle shooter type game where the player plays as Fireboy and has to aim at certain locations to reach Watergirl (We are gonna call it the “goal hitbox” later on).

I know this seems very questionable and concerning. While it is very cursed and just weird to play in general, it is actually very fun and can sometimes get you way into grinding stuff like score and speedrun times (yes, the game is on Speedrun.com. Also I have the WR in score right now with a 7900.) I will go ahead and give you a walkthrough on how the game is like.

Since Flash is no longer available through normal browsers and you still wanna play this game, I would highly suggest you use Bluemaxima’s Flashpoint or the standalone Y8 Browser Client.

When you first open the game on a flash projector or the Y8 browser, you’ll get greeted with a title screen with a text that will welcome the player on the top left (Which is pretty unusual due to the fact that it’s a fangame.)

You’ll see some starting options (Play and continue depending if you have played it before), an id.net image that contains a link to the id.net main page (now becoming an age verification app) and a login button on the top left that opens up the Y8 Login window in game that gets replaced with a welcome message if the player is logged in with their Y8 account. 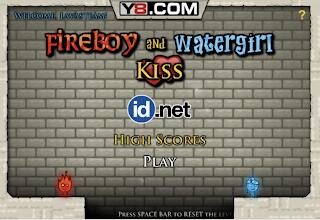 Before we get into the gameplay, I’ll provide the game controls down below:

The game starts off with the user playing as Fireboy. The goal is to aim at a certain location to reach Watergirl by bouncing through walls and using the proper timing. The player will see a health bar on the bottom right of the game window that gives the player 9 bounces that they can use. If the health bar goes all the way down, the player will fail and will have to shoot again.`

In-game screenshot of a level:

Video of user failing a level (Ignore the iOS control center at the end):

Right after the player beats a level, they will encounter a victory screen with a beautiful cursed graphic of (oh god…) Watergirl kissing Fireboy that contains the option to either submit their current score into the Y8 integrated leaderboards (“Save Score”) or to move on to the next level.

At the beginning of the game, there will be a section that contains the player score above the level number that they are currently in on the top left corner of the game window. The less times the heart bounces when the player reaches the goal hitbox (Watergirl), the more points they will gain. Here is a small guide on how much the player can score based on the number of bounces they had per level.

As soon as the player reaches level 17, the level will contain more than 1 goal hitboxes that the player will have to hit. Fortunately, if they end up failing the level and if they already have at least 1 goal hitbox, they don’t have to start the level all over and they can continue on where they left off.

Right after the player has completed all 20 levels, you will encounter a congratulations screen with your final score, the option to submit your score to the leaderboards, a button that says “high scores” to view the score leaderboards, and of course, the same beautiful cursed graphic from the level complete screen as before:

During some times of gameplay, there are some issues with the game physics that I have encountered and some that have to do with the audio. However, I couldn’t get any footage with the audio. So I’ll only provide footage for the issues that the physics have:

Heart bouncing back on edge of a platform:

Heart bouncing back off an edge

Heart clipping through a blinking wall:

Some auditory issues that the game has are the heart collision sounds sometimes being louder than usual. Another issue is that when the player sometimes mute the game and unmute again, the BGM and the sound effects get deafening louder; it sounds all raspy and stuff.

There’s this one short on levels 15, 17, and 18 on where the player can aim at a small gap to reach the goal hitbox. However, this will lower down their health bar rapidly and will give them a lower score, so this would probably best be used in a speedrun.

So far, this game is actually decent and sort of well made for it being a meme fangame. I expected way worse actually like it being some sort of dating sim or some poorly made unplayable game. I did have fun playing it just for meme potential and if you see why it’s mostly on my Points section, I enjoy grinding for a higher score and just speedrunning in general. However, I would’ve respected myself even more if it wasn’t ahem kissing…

So far, if you want to play a memey game as a joke, you could try to play this… I guess…

This was a great game review.

Thanks! I spent hours writing this and struggling to put video footage into this.

you said something unexpected what was that thing you do not want it to be?

I expected a poorly made unplayable game or a very awkward dating sim.

I forgot I made this review and I regret everything

. What the hell was I on that time?